What is a Snow Fence and why do I care?

This fall Baldy’s operations team was hard at work out on the mountain putting in hard work and effort to improve the ski experience. Now while it may now sound like some of the multi-million-dollar improvements we’ve heard about at other resorts in the off-season, adding more snow fencing in critical spots creates a real, on-the-snow improvement making access to some of Baldy’s favourite terrain that much better.

The Upper Dividend area in the past has gotten wind-blown. We installed a series of snow fences in the area to help catch and hold more snow keeping the popular area well covered.

But just how does a snow fence work? The science is dead simple!

Snow fences act as windbreaks, causing blowing snow to be deposited as drifts where it is stored. As wind blows into the snow fencing, the fence reduces the wind speed. That causes most of the snow the wind was carrying to fall out of the gust, thus forming a drift behind the snow fence. When the snow is at rest, the particles freeze together making a smooth snow drift.

The result from a skier’s perspective is very similar to that of the piles forming in front of a snowmaking machine keeping the area well covered. Just call us snow-farmers, instead of snow-makers. 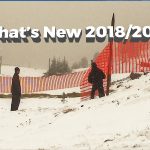 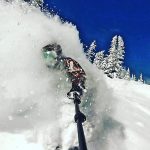